Jorge and the sailing knots

After visiting the historic city of Colonia de Sacramento, we went alongside the plane trees of the ancient road leading to Montevideo. A few kilometres after the exit of “Colonia”, we turned to the left after the village of Riachuelo to take a small road going to Jorge’s. This old single sailor, old friend of Ricardo (our biker friend from Buenos Aires) welcomed us for the evening. The first talks were quite shy. Cabinetmaker for work and passion, it was by chating about wood that the trusting relationship began. While telling us his story about him going from the French high school Buenos Aires to Uruguay, he brought us to the tip of his garden to show us each tree and essences, plus he showed us his nice workshop. There was a nice smell of wood cut. Between the chips and the raw boards, there were beautiful furniture made by the hands of the artist.

We went back to the same path until to reach his home. We discovered a nice living room, with a simple and cosy decoration. The wood obviously was used a lot, plus many sailing object were decorating the walls.

Jorge is passionate by the sea and oceans. Expert sailor, he sailed a lot on the Rio de la Plata with Ricardo during his youth. We spent the evening with good snacks and drinks with a jazz tone by Claude Nougaro in the background. The discussions were about the sea, travels and adventure.

By discovering a nice book about the sailing knots, the discussion changed to this topic. Jorge told us a few stories about his disappointment about them which encouraged him to dive into this bible. In his youth, for example, while he was leaving the port of Buenos Aires with his friends Ricardo ; he asked him to hook the dinghy of the sailing boat up to the back deck. But after a few miles, they noticed the little boat was not following anymore the crease made by the sailing boat. As he didn’t want to accuse his friend of crew, we will never know for sure, in spite of a malicious smile, who was guilty. But, for sure, the dinghy was lost. A few years later, Jorge climbed on a roof with a rope, that was a mistake with the knot which could have cost his life. He needed many days of convalescence to feel better after this fall of a few metres. It was after this misadventure that he promised to himself learning the knots, with the aim of use the most adapted technic to each daily situation.

When we woke up, just the time for the tents to dry after the morning dew, we went with Jorge to share a breakfast with maté and sailing knots. It’s with this tradition that he starts each day and it was with a lot of pleasure that we followed this tradition ; learning with the straw of the maté in the mouth while turning the ropes for making a sheepshank knot before to go back to our journey to Montévideo. 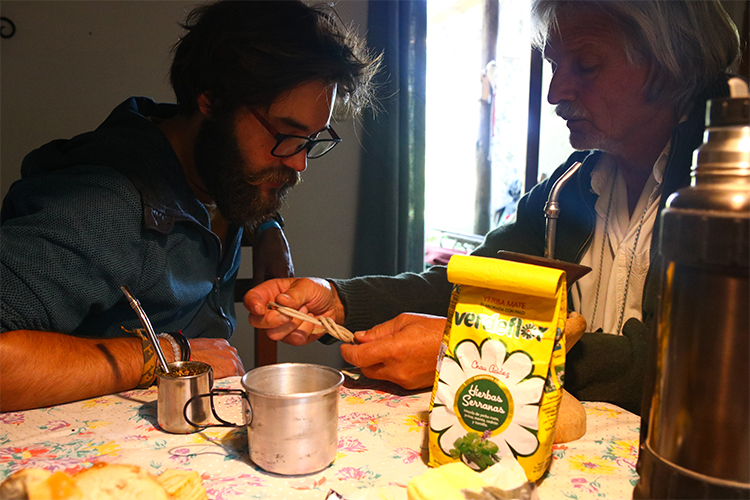