Our crossing of Turkey from East to West was done in 15 days. We pitched up the tent 12 times during this trip. From mountains and volcanos, to the Mediterranean coast, there were as many landscapes as sceneries for our night garden. But the wild camping spot that we will remember for long was the one spent on the Gallipoli peninsula.

To go there, we crossed the Strait of the Dardanelles, we left the fishing port of Kilitbahir and headed to the South of the peninsula. We went alongside the coast on a winding road. On the left hand-side, the small fishing boats were going between the big container ships on the channel.

Arrived in the little village of Alçitepe, we did a break to do some food shopping and to fill up our water tanks for the wild camping. After crossing the village under the surprised eyes of the inhabitants, we took a little path going down to the beach, during 5 kilometres.

At 4pm, we were parked on the top of an old bunker overlooking the beach. But at this spot, no shadow to shelter from the sunshine. The only solution was to hold a tarp between both sidecars to shelter while enjoying the beautiful view. We enjoyed the end of the afternoon with swimming and writing in our diary (including all the details for our blog articles). After chilling and making some repairs like glueing our hiking shoes tired of all the kilometres done, it was time for the beer of the end of the day. At this moment, we met Izmet and his friend. In a (almost) perfect Turkish, we understood they come down to the beach every evening with their old tractor they have renovated. One was driving, while the second one was sat down on a big armchair in the trailer.

I was hopping a last dive in the water, with the sunset. But finally, the sun was hiding quicker than I thought, behind a cloud above the Imbros Turkish island. The water was transparent during the afternoon, allowing us to see 10 metres around. But the purple and dark sky didn’t allow us to see further our fingers at this moment of the day. This situation was increasing the oppressive atmosphere of the depths.

The following day, we woke up at 5am. Divers with flippers and harpoons were already further down, on a little beach, ready for fishing. At dawn, we observed them while having our breakfast before to go back on the road towards North and the Greek border. 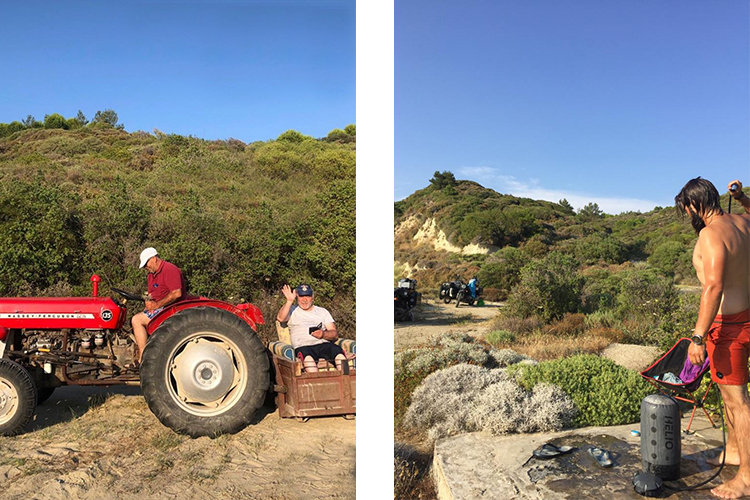