On the Azerbaijani roads, the “Russian Gang” has  learned to know each other.

To hit the road together also means to harmonise our daily life depending on the habits of each one when new travellers join the team.

After some months spent on the road and the different experiences, each one of us used to find a place to camp every night. While at the beginning of the trip, we were a bit worried about this, we finally got used for not  knowing where we will sleep every night. Progressively, we felt like home on each place we found for our camp.

We left Baku at the end of the morning. We crossed the city of Shamakhi to reach the first Caucasian wooded hills. After leaving the main road, we stopped to give the priority to a flock of sheeps going to their sheepfold. Guided by Azerbaijani guys riding horses, they finally gathered together to let us go through.

We found a good spot for wild camping at the end of the afternoon, under trees a bit further away from the secondary road. It was the first camp for the six members of the “Russian Gang”.

We needed to take our marks for adapting our table for the six of us to be together. All along the evening, we played “musical chairs” with the aim of using our comfy folding chairs rather than the water cans of Maika and Christopher. The seat furniture which is the most essential. We spent the evening around the camp fire. We grilled sausages and veggies to enjoy  with  the traditional beers of the end of the day.

On the morning, the bells of the flocks of sheep at sunrise woke us up. Like each morning, a team was folding the tents while the other one was cooking breakfast. We set up the table, unfolded the chairs, switched on the camping stove for coffee. The Italian coffee maker was boiling, the bread was sliced and the pot of jam was open… we were ready for this breakfast in the shadow of the trees.

We got all our strengths back for this new day! We washed up quickly and tidied up everything in each corner of our cases. We left this place which was our “home” for one night. First gear, a nice noise from the engines to climb up the first hill to leave this forest and to go back on the asphalt, let’s go for a new day of adventure! 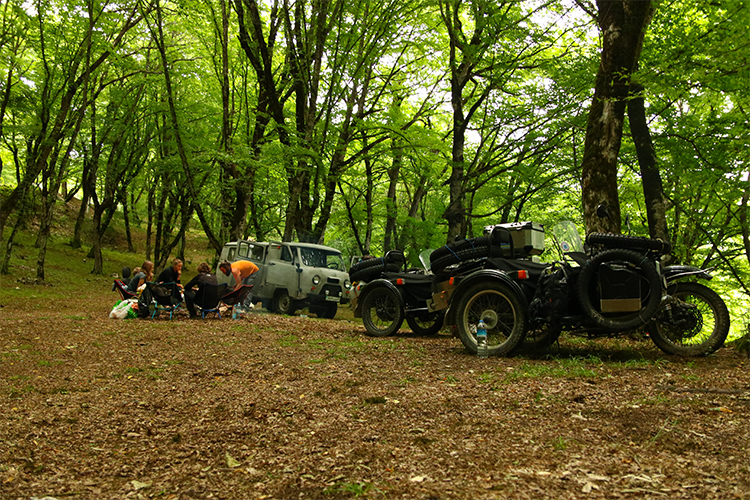